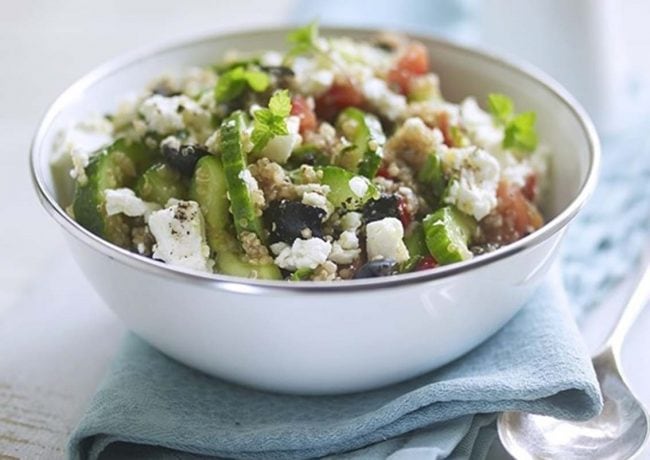 For the best health benefits, choose an extra virgin olive oil like Morocco Gold that has a high polyphenol content. Greek quinoa salad is also a good choice for a heart-healthy diet. Quinoa is a whole grain that is rich in fibre, protein, and vitamins and minerals. Additionally, quinoa has a low glycemic index, which means it won’t cause spikes in blood sugar levels. Together, extra virgin olive oil and Greek quinoa salad make a delicious and nutritious meal that can help promote heart health.

Quinoa is a grain crop that is grown for its edible seeds. It’s pronounced KEEN-wah. It technically isn’t a cereal grain, but a pseudo-cereal. In other words, it is basically a seed, which is prepared and eaten similarly to a grain. If this appeals why not have a look at our Moroccan vegetable couscous.

Quinoa was an important crop for the Inca Empire. They referred to it as the “mother of all grains” and believed it to be sacred. It has been eaten for thousands of years in South America and only recently became a trend food, even reaching superfood status.

Quinoa is now one of the worlds’ most popular health food. You can find quinoa and quinoa products all over the world, especially in health food stores and restaurants that emphasize natural foods.

Quinoa is gluten-free, high in protein and one of the few plant foods that contain sufficient amounts of all nine essential amino acids. It is also high in fibre, magnesium, B vitamins, iron, potassium, calcium, phosphorus, vitamin E and various beneficial antioxidants. There are three main types: white, red and black.

Two flavonoids that have been particularly well studied are quercetin and kaempferol, both found in high amounts in quinoa. In fact, the quercetin content of quinoa is even higher than in typical high-quercetin foods like cranberries. These important molecules have been shown to have anti-inflammatory, anti-viral, anti-cancer and anti-depressant effects in animal studies. By including quinoa in your diet, you will significantly increase your total intake of these (and other) important nutrients

Very High in Fibre, Much Higher Than Most Grains

Another important benefit of quinoa is its high fibre content. One study that looked at 4 varieties of quinoa found a range of 10–16 grams of fibre per every 100 grams. This equals 17–27 grams per cup, which is very high, more than twice as high as most grains. Boiled quinoa contains less fibre, gram for gram because it absorbs so much water.

Gluten-Free and Perfect for People With Gluten Intolerance

According to a 2013 survey, about one-third of people in the US are trying to minimize or avoid gluten. A gluten-free diet can be healthy, as long as it’s based on foods that are naturally gluten-free. Problems arise when people eat gluten-free foods made with refined starches. These foods are no better than their gluten-containing counterparts, as gluten-free junk food is still junk food.

Many researchers have been looking at quinoa as a suitable ingredient in gluten-free diets for people who don’t want to give up staples like bread and pasta. Studies have shown that using quinoa instead of typical gluten-free ingredients like refined tapioca, potato, corn and rice flour can dramatically increase the nutrient and antioxidant value of your diet.

Very High in Protein, With All the Essential Amino Acids

However, quinoa is an exception to this, because it contains sufficient amounts of all the essential amino acids. For this reason, it’s an excellent source of protein. It has both more and better protein than most grains.

Has a Low Glycemic Index, Which is Good for Blood Sugar Control

The glycemic index is a measure of how quickly foods raise your blood sugar levels. Eating foods that are high on the glycemic index can stimulate hunger and contribute to obesity. Such foods have also been linked to many of the common, chronic, Western diseases like type 2 diabetes and heart disease. Quinoa has a glycemic index of 53, which is considered low.

Many people don’t get enough of certain important nutrients. This is particularly true of some minerals, especially magnesium, potassium, zinc and (for women) iron. Quinoa is very high in all 4 minerals, particularly magnesium, with one cup (185 grams) providing about 30% of the recommended daily intake.

Has Beneficial Effects on Metabolic Health

Research in rats showed that adding quinoa to a diet high in fructose almost completely inhibited the negative effects of fructose. However, more research is needed to fully understand the effects of quinoa on metabolic health.

Quinoa is very high in antioxidants, which are substances that neutralize free radicals and are believed to help fight aging and many diseases. One study, researching antioxidant levels in five cereals, three pseudo-cereals and two legumes found that quinoa had the highest antioxidant content of all ten foods.