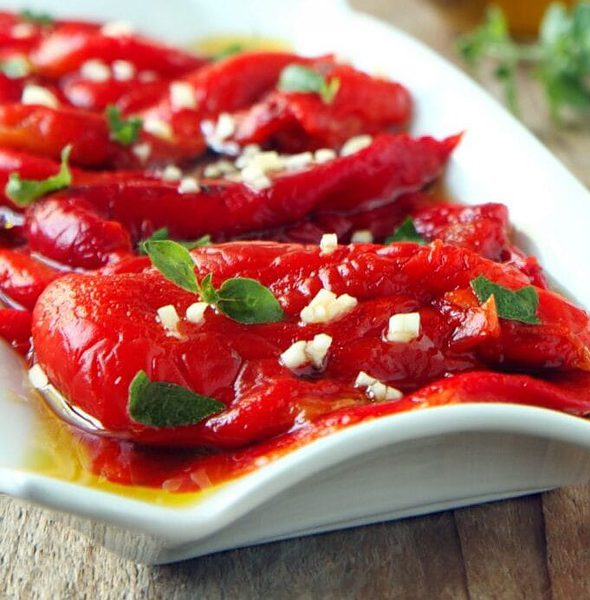 Why Mediterranean diet roasted red peppers with their high polyphenol content is a perfect companion for best olive oil to add colour and health benefits this Thanksgiving.

Bell peppers (Capsicum annuum) are fruits that belong to the nightshade family. They are related to chili peppers, tomatoes, and breadfruit, all of which are native to Central and South America.

Also called sweet peppers or capsicums, bell peppers can be eaten either raw or cooked.

Like their close relatives, chili peppers, bell peppers are sometimes dried and powdered. In that case, they are referred to as paprika.

They are low in calories and exceptionally rich in vitamin C and other antioxidants, making them an excellent addition to a healthy diet.

Bell peppers come in various colours, such as red, yellow, orange, and green which are unripe. Green, unripe peppers have a slightly bitter flavour and are not as sweet as fully ripe ones.

Roasted red peppers makes for the best hummus, pasta sauces, pizza or sandwich toppings. Red peppers are sweeter which is why they’re a more popular option for roasting. The high heat can give off a slightly bitter flavour, so the sweetness of red peppers is great for counteracting this. That being said, yellow or green peppers will still be great roasted up and soaked in garlic sauce.

What Are Bell Peppers?
Fresh, raw bell peppers are mainly composed of water (92%). The rest is carbs and small amounts of protein and fat. Bell peppers are primarily composed of carbs, which account for most of their calorie content with 3.5 ounces (100 grams) holding 6 grams of carbs.

The carbs are mostly sugars such as glucose and fructose which are responsible for the sweet taste of ripe bell peppers.

Bell peppers are loaded with various vitamins and minerals:

Health benefits of bell peppers
Like most whole plant foods, bell peppers are considered a healthy food. High consumption of fruits and vegetables has been linked to a reduced risk of many chronic illnesses, such as cancer and heart disease. In addition, bell peppers may have a number of other health benefits.

Eye health
The most common types of visual impairments include macular degeneration and cataracts, the main causes of which are aging and infections. However, nutrition may also play a significant role in developing these diseases. Lutein and zeaxanthin — carotenoids found in relatively high amounts in bell peppers may improve eye health when consumed in adequate amounts. In fact, they protect your retina, the light-sensitive inner wall of your eye from oxidative damage.

A number of studies indicate that regular consumption of foods rich in these carotenoids may cut the risk of both cataracts and macular degeneration. Thus, adding bell peppers to your diet may help lower your risk of visual impairments.

Anemia prevention
Anemia is a common condition characterized by a reduced ability of your blood to carry oxygen. One of the most common causes of anemia is iron deficiency, the main symptoms of which are weakness and tiredness.

Not only are red bell peppers a decent source of iron, they are also exceptionally rich in vitamin C, which increases the absorption of iron from your gut. In fact, one medium-sized red bell pepper may contain 169% of the RDI for vitamin C.

Dietary iron absorption increases significantly when you consume fruits or vegetables high in vitamin C. For this reason, eating raw bell peppers alongside iron-rich foods — such as meat or spinach may help increase your body’s iron stores, cutting your risk of anemia.