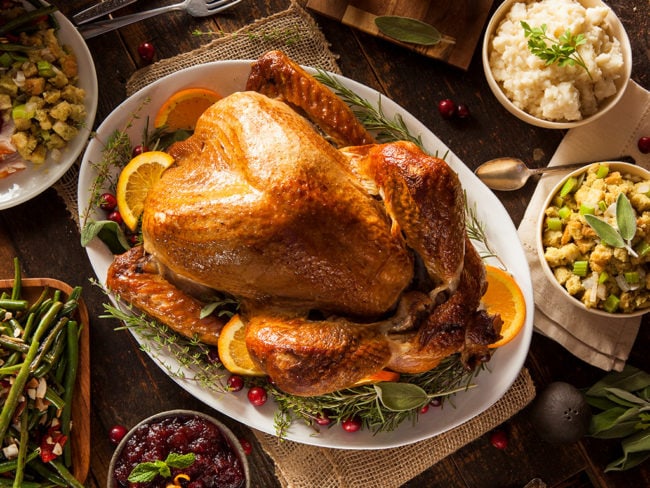 Here’s how you can substitute Morocco Gold extra virgin olive oil for butter as part of your heart healthy Thanksgiving celebrations, starting with your turkey.

Holidays are often centred around food and nothing could be more true about Thanksgiving. It is a time to celebrate and give thanks for the people and experiences you love and enjoy. Food is meant to be part of the joy in your life and one meal or day of eating (even overeating) should not derail your health or fitness goals.

Thanksgiving only comes around once a year and gaining weight during the holiday season is quite normal. Most of us put on a pound or two (some gain more) during the holidays but some of us keep the extra weight permanently.

Many want to enjoy their Thanksgiving day without feeling overly full or uncomfortable afterward. Being stuffed is only a good idea if you are a turkey. The good news is that it’s possible to eat your seasonal favourites and stay on top of your health goals. With some extra thought and prep, you can have the Thanksgiving you desire.

An incredibly simple and effective way of ensuring healthy alternatives this Thanksgiving is to substitute extra virgin olive oil for butter in your cooking.

Extra virgin olive oil is a healthy substitute for vegetable oil or butter. It is high in monounsaturated fats, which are good for your heart, and help you to maintain a healthy weight. A quality extra virgin olive oil like Morocco Gold also contains antioxidants that can help protect your cells from damage.

You can now use our wonderful extra virgin olive oil, Morocco Gold to add to the richness of your Thanksgiving celebrations. Here is how to use it with the centrepiece of your celebrations – the Thanksgiving turkey.

The History Of Turkey With Thanksgiving Celebrations

It is often assumed that today’s Thanksgiving menu originated in an event commonly referred to as the “first Thanksgiving.” There is indeed evidence of a meal shared between Pilgrim settlers at Plymouth colony (in what is now Massachusetts) and local Wampanoag Indians in late 1621. But there is no indication that turkey was served. For meat, the Wampanoag brought deer, and the Pilgrims provided wild “fowl.” Strictly speaking, that “fowl” could have been turkeys, which were native to the area, but historians think it was probably ducks or geese.

What’s more, the Pilgrims do not appear to have considered this meal a milestone worthy of special commemoration. No 17th-century reference to it exists beyond a letter written by Plymouth colonist Edward Winslow. For the Pilgrims, giving thanks for the autumn harvest wasn’t a new concept. As a tradition with roots in European harvest festivals and Christian religious observances, “days of thanksgiving” were fairly common among the colonists of New England. Throughout America’s colonial era, communities held their own unofficial Thanksgiving celebrations, and few people associated them with the Plymouth settlers.

By the turn of the 19th century, however, turkey had become a popular dish to serve on such occasions. There were a few reasons for this. First, the bird was rather plentiful. One expert estimated that there were at least 10 million turkeys in America at the time of European contact. Second, turkeys on a family farm were almost always available for slaughter. While live cows and hens were useful as long as they were producing milk and eggs, respectively, turkeys were generally raised only for their meat and thus could be readily killed. Third, a single turkey was usually big enough to feed a family.

Nevertheless, turkeys were not yet synonymous with Thanksgiving. Some people have credited Charles Dickens’s A Christmas Carol (1843) with bolstering the idea of turkey as a holiday meal. But another writer, Sarah Josepha Hale, played an arguably more important role. In her 1827 novel Northwood, she devoted an entire chapter to a description of a New England Thanksgiving, with a roasted turkey “placed at the head of the table.” At about the same time, she also began campaigning to establish Thanksgiving as a national holiday in the United States, which she believed would help unify the country as it teetered toward civil war. Her efforts finally paid off in 1863 with a presidential proclamation by Abraham Lincoln.

As Thanksgiving became an official American holiday, a national mythology formed around it. An 1841 collection of Pilgrim writing had referred to the meal described by Winslow as “the first Thanksgiving.” Although Winslow didn’t specifically mention turkey, his fellow colonist William Bradford did refer to a “great store of wild Turkies” at Plymouth that fall, in a journal that was reprinted in 1856. Before long, the cultural links between Pilgrims, turkeys, and Thanksgiving became an inextricable and integral part of American schoolchildren’s education.

From a more practical perspective, turkey has also remained relatively affordable. Although the wild turkey was considered endangered in the early 20th century, its population once again stands in the millions. In addition, modern breeding practices have helped make turkeys both larger and cheaper than ever, thus ensuring their continued place on the Thanksgiving table. Hence the theme thanksgiving turkey.

You can now use our wonderful extra virgin olive oil, Morocco Gold to add to the richness of your Thanksgiving turkey celebrations. Remember to try our thanksgiving sauce.