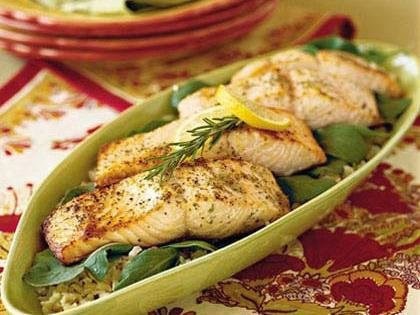 Salmon, originally, the large fish now usually called the Atlantic salmon (Salmo salar), though more recently the name has been applied to similar fishes of the same family (Salmonidae), especially the Pacific salmon, which constitute the genus Oncorhynchus.

The six species of Pacific salmon (Oncorhynchus) are the following: the sockeye or red salmon (O. nerka), which ranges from the northern Bering Sea to Japan and the Columbia River of the American Northwest; the coho or silver salmon (O. kisutch), ranging from the Bering Sea to Japan and the Salinas River of Monterey Bay; the chum or dog salmon (O. keta), ranging from the Mackenzie and Lena rivers in the southern Arctic southward to Japan and the Rogue River; the king, spring, or chinook salmon (O. tshawytscha), from the Yukon River to China and the Sacramento River; the pink or humpback salmon (O. gorbuscha), from the Arctic to Japan and the Klamath River; and the cherry salmon (O. masu), which is found off Japan. The Atlantic salmon is native to the rivers on both sides of the North Atlantic. The adult Atlantic salmon averages about 10 pounds (4.5 kg) in weight, while the king salmon averages about 23 pounds (10 kg), though individuals of 50–80 pounds (22–36 kg) are not uncommon. Chum salmon average about 10–12 pounds (4.5–5.5 kg); coho salmon weigh about 7–10 pounds (3–4.5 kg); sockeye, about 4–7 pounds (2–3 kg); and pink salmon, 3–6 pounds (1.3–2.7 kg).

Fish and shellfish are nutrient dense and salmon is no exception. It is rich in a protective antioxidant, astaxanthin, and it is an excellent source of high-quality protein, vitamins and minerals (including potassium, selenium and vitamin B12). However, it is the content of omega-3 fatty acids in salmon that receives the most attention, and rightly so. It is this essential fat which is responsible for the reputation of oily fish as a valuable ‘brain food’.

The most beneficial omega-3 fats occur naturally in oily fish in the form of eicosapentaenoic acid (EPA) and docosahexaenoic acid (DHA). These fatty acids are thought to contribute to healthy brain function, the heart, joints and general well-being. The idea that eating fish may reduce the risk of heart disease began in the 1970s and 1980s when it was noted that among the Inuits in Arctic Greenland (where high consumption of marine animals was the normal diet), heart disease was very low. In addition to heart disease, scientists are now investigating the role that fish consumption may have in protecting us against some cancers as well as many chronic diseases including Alzheimer’s disease , asthma, depression, diabetes, high blood pressure, macular degeneration, multiple sclerosis and rheumatoid arthritis.

Omega-3 is termed as an essential fatty acid because the body cannot synthesise it, so it must be obtained from the diet. To optimise your body’s supply of essential fats rich in EPA and DHA, aim to eat oily fish such as salmon, mackerel, sardines, herring and fresh tuna regularly.  The Department of Health guidelines state that we should aim to eat fish at least twice a week with at least one portion being an oily variety, like salmon. For pregnant and breastfeeding women there is specific guidance. EPA and DHA are important for your baby’s developing central nervous system, including the brain, so they make a valuable contribution to a healthy balanced diet during pregnancy, but follow do the NHS advice with regards to quantities.

This dish is a highly nutritious choice that has a wonderful citrus flavor from the lemon. Monounsaturated fat from the extra virgin olive oil, Omega-3 fatty acids from broiled salmon, and fiber from brown rice make for a wonderfully heart healthy recipe.