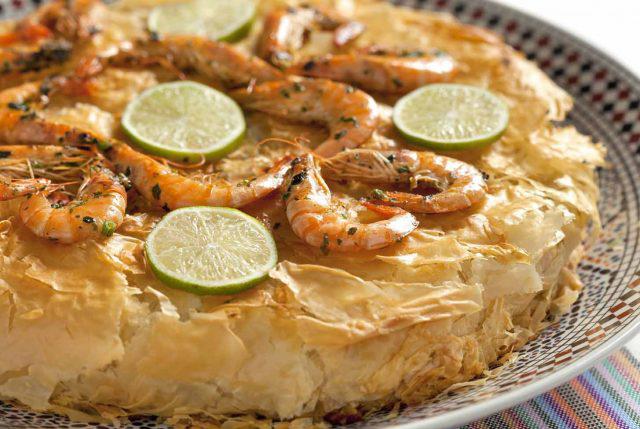 There are many reasons to love Moroccan seafood pastila, but one of the best is that it pairs so well with extra virgin olive oil like Morocco Gold. This healthy and flavourful oil has a wide range of health benefits, making it the perfect addition to any meal.

In addition, extra virgin olive oil can help to regulate blood sugar levels and reduce inflammation throughout the body. When used in cooking, it can help to bring out the natural flavours of food. As a result, Moroccan seafood pastila is best when made with the best olive oil available. The combination of healthy ingredients and delicious flavours makes this recipe a winner in any kitchen.

Another wonderful traditional Moroccan dish prepared for great dinners and wedding ceremonies. Traditionally served after small plates of fresh salads and before the main Tagine course. For instance, Moroccan Seafood Pastilla is a great dish to try out with our extra virgin olive oil.

The name comes from the Spanish word pastilla, meaning in modern Spanish either “pill” or “small pastry”. It is believed that the basic concept of pastilla was probably brought to Morocco by Moorish Muslims who left Spain in the 16th century, or perhaps earlier, because there had been considerable traffic between Morocco and Spain since the Moors conquered the latter in the seventh century.

Others believe that the dish was introduced into Morocco by the Algerians who migrated to Tétouan after the French invasion of Algiers in 1830.

In Morocco, there are two main versions of pastilla: one with poultry and one with seafood.

Here we explore this traditional Moroccan dish with the benefits of selected seafood, shrimp, squid (calamari) and whiting fish.

Shrimp is quite nutritious and provides high amounts of certain nutrients, such as iodine, that aren’t abundant in many other foods. On the other hand, some people claim that shrimp is unhealthy due to its high cholesterol content. Additionally, it is commonly believed that farm-raised shrimp may have some negative health effects compared to wild-caught shrimp.

Shrimp Is Low in Calories yet Rich in Nutrients

Shrimp has an impressive nutrition profile. It is quite low in calories, providing only 84 calories in a 3-ounce (85-gram) serving, and does not contain any carbs. Approximately 90% of the calories in shrimp come from protein, and the rest come from fat. Additionally, the same serving size provides more than 20 different vitamins and minerals, including 50% of your daily needs for selenium, a mineral that may help reduce inflammation and promote heart health.

Shrimp is also one of the best food sources of iodine, an important mineral that many people are deficient in. Iodine is required for proper thyroid function and brain health. Shrimp is also a good source of omega-6 and omega-3 fatty acids, in addition to astaxanthin antioxidants, which may have a variety of health benefits.

Calamari is the culinary name for squid, which is a type of mollusk that lives in oceans around the world. This seafood plays a significant role in the Mediterranean and East Asian diet, and it also plays a part in North American and Western European cuisine.

Calamari is an excellent source of nutrients, and it is especially valued in Japanese cuisine.

In Japan, restaurants serve calamari in all kinds of different ways. These serving styles include sashimi, sushi, tempura (fried), grilled calamari, and more.

Calamari has a relatively mild taste however it tends to absorb different flavours from whatever it is cooking alongside. For instance, calamari quickly absorbs strong flavours from ingredients like garlic, ginger, tomato, and herbs.

Calamari is a rich source of protein, of which it provides 15.6 grams per 100 g serving. Also, calamari is a complete protein, which means that it provides all nine of the essential amino acids in adequate amounts.

Calamari contains choline which isan essential vitamin-like nutrient that is particularly important for brain and liver health. It offers around 65 mg per 100-gram serving.

Calamari contains high concentrations of selenium, which is an important mineral with antioxidant mechanisms.

Copper is an essential mineral that plays a key role in bone health, the cardiovascular and nervous system, iron metabolism, and red blood cell formation. Copper is the most concentrated nutrient in calamari, and 100 grams provides 1.9 mg of the mineral, which is equal to 95% of the daily recommended intake.

What is Whiting Fish?

Whiting fish is a popular type of seafood in certain parts of the Atlantic and Mediterranean. It is scientifically known as Merlangius merlangus. A number of other common white fish are called whiting fish, although they aren’t technically from the same species. These fish are modest in size, reaching a maximum size of just over two feet, and has five fins and a long, thin body. In terms of taste, whiting fish is very similar to cod and has a light, lean texture that makes it quite versatile for cooking. These fish are generally considered safe, as they are low in mercury and tend to have minimal environmental toxins.

When it comes to nutrition, these fish are not extremely nutrient-dense, but they may provide a number of fats, including some omega-3 fatty acids, as well as good levels of protein (15 grams in a 3.5-ounce filet) and moderate amounts of calcium, potassium, vitamin B, magnesium, and phosphorus. That same size serving of this fish provides about 90 calories. There are no carbohydrates in this fish.

Whiting is an under-appreciated fish that, amongst many other uses makes a great alternative to cod in fish and chips.