How The Mediterranean Diet Can Help Combat Psoriatic Arthritis 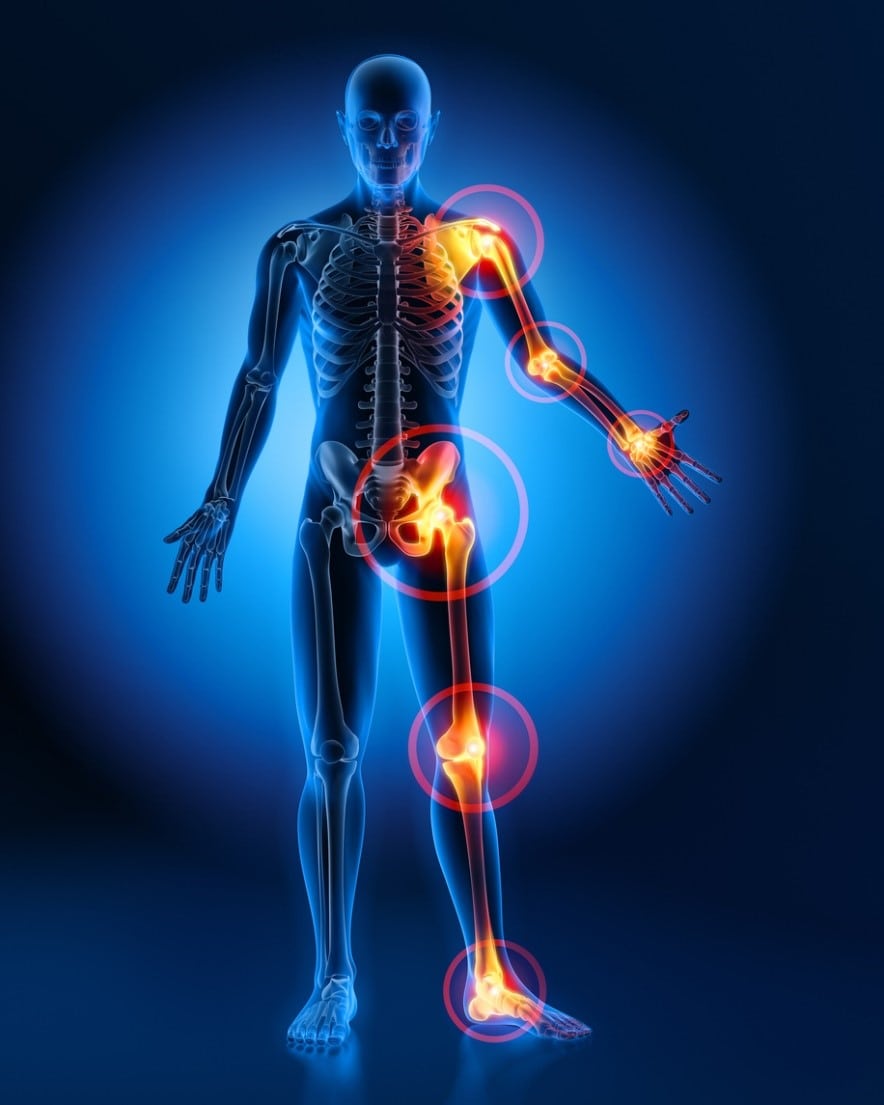 Osteoarthritis (OA) is a form of arthritis that features the breakdown and eventual loss of the cartilage of one or more joints. Cartilage is a protein substance that serves as a “cushion” between the bones of the joints. Among the over 100 different types of arthritis conditions, osteoarthritis is the most common joint disease.

As part of normal life, your joints are exposed to a constant low level of damage. In most cases, your body repairs the damage itself and you do not experience any symptoms. But in osteoarthritis, the protective cartilage on the ends of your bones breaks down, causing pain, swelling and problems moving the joint. Bony growths can develop, and the area can become red and swollen.

The exact cause is not known, but several things are thought to increase your risk of developing osteoarthritis, including:

Your risk of developing the condition increases as you get older. Primary (idiopathic) osteoarthritis, OA not resulting from injury or disease, is partly a result of natural ageing of the joint. With aging, the water content of the cartilage increases, and the protein makeup of cartilage degenerates as a function of biologic processes. Eventually, cartilage begins to degenerate by flaking or forming tiny crevasses. In advanced osteoarthritis, there is a total loss of the cartilage cushion between the bones of the joints.

Repetitive use of the worn joints and overusing your joint after an injury or operation when it has not had enough time to heal can mechanically irritate and inflame the cartilage, causing joint pain and swelling.

Loss of the cartilage cushion causes friction between the bones, leading to pain and limitation of joint mobility. Inflammation of the cartilage can also stimulate new bone outgrowths (spurs, also referred to as osteophytes) to form around the joints.

Osteoarthritis occasionally can develop in multiple members of the same family, implying a hereditary (genetic) basis for this condition.

Osteoarthritis is therefore felt to be a result of a combination of each of the above factors that ultimately lead to a narrowing of the cartilage in the affected joint.

The main symptoms of osteoarthritis are joint pain and stiffness, and problems moving the joint. Some people also have symptoms such as: – swelling – tenderness – grating or crackling sound when moving the affected joints

The severity of osteoarthritis symptoms can vary greatly from person to person, and between different affected joints.

For some people, the symptoms can be mild and may come and go. Other people can experience more continuous and severe problems which make it difficult to carry out everyday activities.

Almost any joint can be affected by osteoarthritis, but the condition most often causes problems in the knees, hips and small joints of the hands.

You should see your GP if you have persistent symptoms of osteoarthritis so they can confirm the diagnosis and prescribe any necessary treatment.

This polyphenol is synonymous with p-HPEA-Elenolic acid. It is a member of the Tyrosol family of polyphenols and has the chemical formula : C19H22O7

While information on LA bioactivity is limited, a few years ago, LA was demonstrated to behave as an antioxidant. Furthermore, LA has been shown to have anti-inflammatory effects by controlling and downregulating NF-κB (NF-kB is a type of DNA that is thought to play a pivotal role in the initiation of osteoarthritis and the perpetuation of chronic inflammation in rheumatoid arthritis) as well as the potential to induce a caloric restriction-like state that affects the muscle, brain, fat tissue and kidney, particularly through activation and increased levels of sirtuins. (Sirtuins are a family of proteins that regulate cellular health. They play a key role in regulating cellular homeostasis, keeping cells in balance).

A Study Of Ligstroside-Aglycone In Treatment Of Osteoarthritis

In a recent study at the Faculty Of Pharmacy Seville and the Biomedical Research Institute Coruna (M.S. Meiss, M. Sanchez-Hidalgo, A. González-Benjumea) the effectiveness of LA on osteoarthritis (OA) was examined.

Osteoarthritis is currently, the most frequent cause of pain, deformity and dysfunction in the elderly. It is a late-onset, complex disease of the joint, characterised by progressive failure of the extracellular cartilage matrix (ECM), together with changes in the synovium and subchondral bone.

OA persists as the most common form of arthritis worldwide and the sixth leading cause of disability. Unlike most tissues, articular cartilage does not contain blood vessels, nerves or lymphatics, rather, articular cartilage is composed of a dense ECM with a sparse distribution of highly specialised cells called chondrocytes. Aberrant expression of degradative proteases or catabolic mediators is induced in OA chondrocytes that contributes to cartilage destruction.

To date, there is no definitive cure for this debilitating disease. The mechanism of disease progression in OA remains largely unknown and thus, to date, a more personalised approach is required to aid patient disease management. Current treatments are targeted at reducing symptoms of the inflammatory reaction that occurs following destruction of the essential joint cartilage. These treatments, however, do not prevent the significant pain associated with OA or the often reported restriction of mobility and activity.

To address this unmet need, alternative approaches, including the use of polyphenols as a novel therapeutic intervention are under examination. The objective of this study was to analyse if the polyphenols found in extra virgin olive oil are able to reverse the catabolic activity that contribute to cartilage destruction in OA.

Acetylated ligstroside showed the most promising results for implementation in treating OA as it reduced the expression of pro-inflammatory genes such as inducible nitric oxide (iNOS), matrix metalloprotease-13 (MMP13) and interleukin-1β (IL1B) at both RNA and protein levels; decreased nitric oxide (NO) levels from cartilage explants and also reduced proteoglycan (PG) losses in human osteoarthritic cartilage explants and chondrocytes.

These results substantiate the role of polyphenols in OA with implications for therapeutic intervention and our understanding of OA pathophysiology.

Recently, data from the Osteoarthritis Initiative (OAI) have demonstrated that adherence to the Mediterranean diet is associated not only with better quality of life but also, significantly, with a lower prevalence of OA. Given that the general population can be viewed as at risk in the development of OA in later life, an approach that relies on dietary modification is attractive in terms of risk / benefit and, potentially, an approach that is more likely to be implementable. Indeed, as an alternative to traditional treatments, alternative modalities have come to the fore including the effects of polyphenols as non-invasive treatments, based on the evidence that epigenetic changes are triggered by dietary nutrients and contribute to the prevention of a number of diseases.

Following a Mediterranean Diet can help relieve the symptoms of Psoriatic Arthritis, due to the anti-inflammatory properties of the foods it contains.

As reported in Verywellhealth the anti-inflammatory compounds present in fruits, vegetables and extra virgin olive oil – the key elements of The Mediterranean Diet – can reduce the symptoms of this condition which affects 1 in 3 people who have Psoriasis.

The article sets out the top five foods to eat with Psoriatic Arthritis, which are:

Fruits and vegetables are full of vitamins, minerals, phytochemicals, and antioxidants that have anti-inflammatory effects. A diet rich in fruits and vegetables can also help with weight loss and weight management, as these foods are relatively low in calories and high in fiber, keeping you full without exceeding your energy needs.

Fatty fish, such as salmon, tuna, and mackerel, are rich in omega-3 fatty acids, which are known to reduce inflammation throughout the body. Salmon is a great source of vitamin D and vitamin B12. Both vitamins are important in lowering inflammation and have been used to help treat psoriasis. Vitamin D also has positive effects on autoimmunity, which may help reduce the severity of diseases such as PsA.

Turmeric root has been used in Ayurvedic medicine for centuries to treat the symptoms of joint pain and inflammation in arthritis. The active compound curcumin, present in turmeric, has significant anti-inflammatory, antioxidant, antimicrobial, and anticancer properties. Adding turmeric to your diet, like in a latte or curry stir-fry, may reduce inflammation and managing your symptoms of PsA.

Studies have shown that curcumin may help manage the symptoms of many conditions, such as rheumatoid arthritis (RA) and irritable bowel syndrome (IBS). Most of the data, however, comes from curcumin supplementation, and consuming high doses is linked to gastrointestinal upset, increased risk of bleeding, and other side effects.

Like turmeric, ginger is a root that contains anti-inflammatory and antioxidant compounds that have been used to treat diseases similar to PsA, such as rheumatoid arthritis (RA). The active components in ginger, including gingerol, shogol, and zingerone, can help ease joint pain, a common symptom of PsA. These compounds have been shown to target some of the same pathways as common arthritis medications.

Why The Mediterranean Diet Helps With Psoriatic Arthritis

As outlined above, the Mediterranean Diet focuses on whole grains, fruits, vegetables, nuts, extra virgin olive oil, and fatty fish—foods that are rich in antioxidants and anti-inflammatory compounds. Several studies have found associations between following a Mediterranean diet and less severe PsA symptoms.